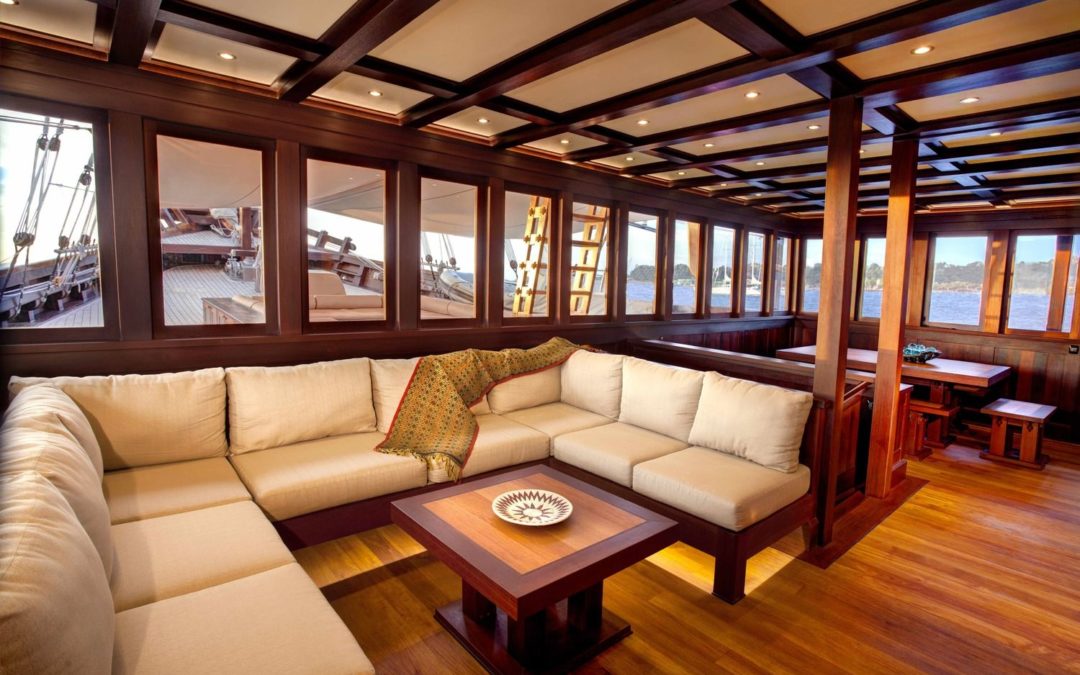 There is no better, or more luxurious a life than that on a boat. The constant motion, even when you are still, and the eminent, breathtaking beauty of your ever-changing surrounds is the luxury that far outweighs the style or vessel to which you are a part. No decent sailor denies the natural, yet supernatural connection with his boat. How she sounds in your mind. What she tells. The sometimes-secret reestablishment that she always keep you safe. Those are the things that are the wealth of sailing and they are a constant; whether you’re aboard a 32-foot Manatu. or a cat with a length-on-water line of 23 metres. When all there is, is simply you in the night, no visible shoreline lights, navigating inky seas and stormy skies, watching for whales, cargo ships and the shipping containers they lose. Knowing how insignificant, vulnerable and yet protected you are, is the luxury too few of us afford ourselves.

Boat is shorthand for “better outlay another thousand” simply because it’s a truism whenever you’re within a hundred metres of a marina, chandlery, boat broker or marine mechanic. Boating is not for the feint of wallet, although it most certainly entices the feint of brain and corporate tax write-offs. Marinas overflow with the bilge of these decisions – finger wharves of languishing high end, magnificent sailing boats and million dollar stink boats in berths they’ve not left for years because some idiot saw her as nothing but a means to an end, rather than a majestic and magnetic conjute for the sea and the human heart. It’s akin to walking through an animal shelter. Or a kindly visit to an early-onset dementia ward between the orphanage and Home For Wayward Teenagers.

I don’t know how luxurious you need to go on a boat. Of course there are legendary stories of the obscenes and extremes of superfluity. Aristotle Onasis and his whale foreskin bar stools aboard Christina O, their teeth made into foot rests and bar inlays of scrimshaw scenes from the Odyssey. An albatross bill made into a snuff box that was likely purchased rather than commissioned, but the brutal arrogance of wonton ownership merely amplifies the utter vulgarity of it. Storm lanterns, whaling harpoons and wound rope around the base of the bar do not cofirm Onassis’ love for all things seafaring, but illustrate a rather stopless proclivity for making money for the crass and immoral chattels that so often go with it.

The luxury yacht market benefits most from content marketing, with the $US350 million Dubai at Number 5 on the most expensive Super Yachts list. Five it may be, and it’s absolutely Number One in tastelessness. Gauche doesn’t even cover it. It’s what the incessant hum of an airconditioner vibrtating its way through glassy serenity would look like if you could build it.

You wanna see crass and overbearing? Wonder how connected to the sea some owners really are? Simply search Super Yachts. To even fit the category we’re talkin’ a minimum of 24m from bow to stern. And really, how can a yacht be a stinkboat but a stinkboat never a yacht? The world’s most expensive – at $US$4.5 billion – is History Supremee, owned by an anonymous Malaysian buisinessman because you’d want to be anonymous wouldn’t you, with 100,000kg of gold and platinum part of its construction. The base of the vessel itself is coated in a thin layer of gold. Inside is a statue made entirely of the bones of Tyrannosaurus Rex. The Master Suite boasts a 24-carat gold panoramic wall aquarium. Why..? You’re at sea! Onboard too, is a liquor bottle adorned with a rare 18.5-carat diamond worth $US45 million. Huh..? Because sundowners, and drinking in the harmony of fathomless water and the life within it, under an endlessly canvas changing sky isn’t enough? I’ve had cask wine that 40km winds necessitated gaffa taping the box to the tiny bench of a tiny galley, from a Vegemite jar. After two hours of weathering an unexpected night storm, with complete failure of the autohelm and nav equipment (despite precautionary backups), marveling at what a truly tiny fish we are in this enormous sea, no 18.5-carat diamond could have made me feel any better, smarter, or luckier.

So how tastefully luxurious can you be, with marine joinery? Woods have to be hardy and durable, not soft; nor brittle. Cedars and cypress would be high on the list with its exceptional resistance to weathering and rot. Oak, with its strength and straight grain, works and finishes well but is prone to swelling, shrinkage and cracking. Teak, the most expensive and extremely rot resistant is also impervious to marine borers, making it most certainly the luxury choice.

Taste however, is a whole different kettle of fish.

Having beautiful timber bedroom furniture is sought after on land and sea, and for marine Master Suites, it’s not uncommon for walnut woodwork to be offset by contrasting pale oak. Rich, mahogany panelling coupled with gold furnishings is also a favoured interior design; theeast tacky of which may be onboard the 62-metre RoMa. Regardless of the timber choice and whether or not it’s in vogue, obviously all designs incorporate all forward facing windows offering panoramic ocean views.

Which is what you want on a boat, from Super Yacht to tinnie. You want the ocean; it’s why you’re there. You’re there for all the abundant, innate luxuries: the solitude, the disconnection in order to completely connect with something else. That something else that cannot be designed or built by anything other than the magnificent power of Neptune.

The only luxury wood you need for that is a deck.